The problem with your “pit bull” shirt

Peach is so conflicted about wearing her Michigan hoodie considering how badly they (along with many other schools) have dropped the ball when it comes to addressing sexual assault on campus.

We live in an intense, politically correct, emotionally charged world. Where anything you sell, buy, wear, consume, do (or don’t do), say, support or smoke is sure to be painstakingly dissected by some Preachy McPreacherson who’s more than happy to take your fun, feel-good personal statement and walk all over it in their poopy preacher shoes.

I’d like to talk about t-shirts. Specifically, pit bull rescue t-shirts and the messages they convey.

When is a t-shirt not just a t-shirt?

In the last week, I’ve seen the following crowdfunding shirt and variations of it pop up in my Facebook newsfeed at least five or six times, oftentimes hilariously right next to a post from pages like A Mighty Girl or Miss Representation.

What it says: Some girls play with dolls. Real girls rescue pitbulls!!!

What it does: Legitimizes the idea that there are girls out there who aren’t “real girls.”

Excessive use of exclamation points aside, I have a REAL problem with this shirt. Because it further engenders the insidious and absurd notion that some girls/women (or boys/men) lack legitimacy in some way. Which is a pretty ironic message to send when you spend most of your time fighting for the “rights” of dog owners who happen to have a certain kind of dog.

But that irony isn’t what ultimately bugs me. Because the dog rescue community is one seriously ironic space and I’ve grown rather numb to it. What gets me about shirts like this is that they represent messages that are profoundly damaging to women, and yet the rescue community largely comprises women. So what gives?

Peach says, “How exactly does disparaging women and girls help your advocacy and rescue efforts?”

The reality is that, at least in the United States, we’ve become so comfortable with appropriating the phrase “Real Man” or “Real Woman” to suit our own purposes, we’ve lost sight of the REAL problem with using that kind of language to begin with.

Which brings me to another shirt. One that has succeeded in completely reinforcing my belief that so many pit bull rescue groups out there are every bit as harmful to pit bull welfare as breed discrimination and abusive owners are. For the record, you will never see me donate to, volunteer for or support any group clueless enough to be promoting this kind of language and merchandise. I don’t care how many dogs they’ve “saved” or fences they’ve built or how many free bags of food they distributed last year. 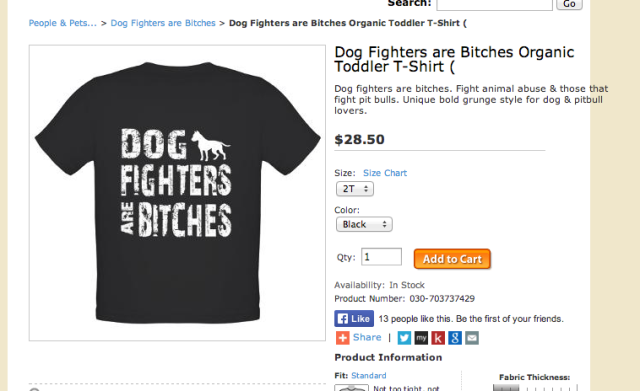 The best part about these shirts is that they’re available in women’s and toddlers’ sizes too. Awesome. Because every 5-year old should have their own “Dog Fighters are Bitches” tee to wear to their first day of kindergarten. Thanks, Cafe Press.

With this shirt, it is both the irony and the flagrant offense towards women that completely crack me up. Literally, you are saying Dog Fighters are Female Dogs, which is supposed to be a put down? Wait, I’m so confused.

Because apparently nothing is more insulting to men, particularly those who fight dogs, than being compared to a woman.

But here’s the thing: Dog fighters aren’t the ones buying your clever or cutesy, pro-pit bull t-shirts and they don’t give a shit about what you have to say about them or how they choose to spend their time. But guess who is buying (or not buying) your shirts? Women. Particularly those of us who have the luxury of spending money on frivolous dog t-shirts. And as shocking as it might be to hear, we’re not big fans of lazy, unoriginal marketing that reinforces bullshit gender stereotypes. In fact, that’s why a lot of us got involved with dog rescue, pit bulls and animal welfare in the first place.

I’ve got piles of dog t-shirts in my closet. Some of them I purchased, some of them were given to me. Some of them are so old and grungy I only wear them to bed or to the gym. Some of them are ones that I was far more excited about when I bought them than I am now, but I still wear them because, hey, why get rid of a perfectly good t-shirt? Mostly, I prefer the ones that combine drinking and dogs.

What I don’t have are shirts that disparage others for the sake of my cause. Especially when we’re already having to work so hard to convince our fellow human beings that us and our dogs are just like them and their dogs (or lack of dogs). 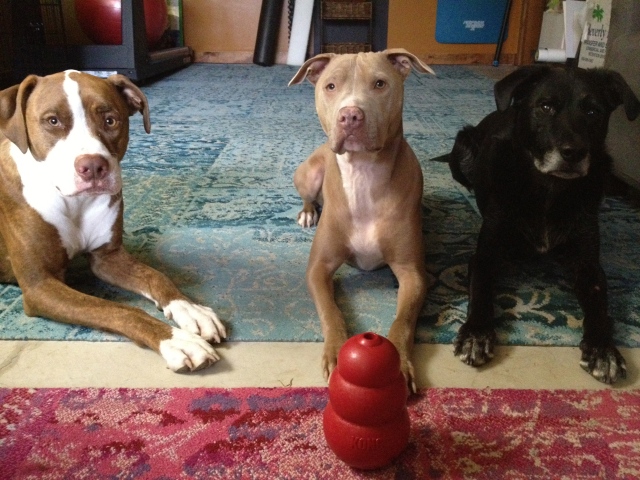 Every time you design, sell, share or buy one of these t-shirts putting others down, stating that “if my pit bull doesn’t like you, I probably won’t either,” or defining what is or isn’t a “real man” or “real woman,” or calling someone a bitch, you are making the job of pit bull advocacy more difficult.

Using that language and wearing those shirts doesn’t make you a real man or real woman or real advocate. What it makes you is a real problem, for all of us.

17 Responses to The problem with your “pit bull” shirt