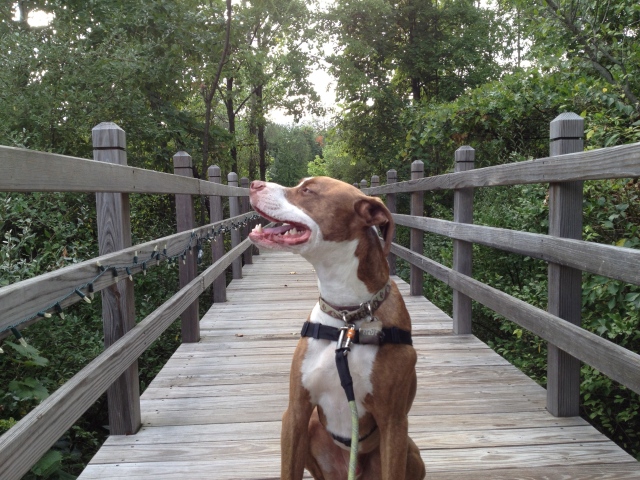 You know those moments when you say something (or fail to say something) and then a few minutes later you find yourself wishing you’d said something else instead, and kicking yourself for missing the opportunity?  I have them all the time.  I suppose I’m either getting slow-witted in my 30s or I enjoy engaging in psychological warfare with myself on a daily basis.  Either way, it’s frustrating and makes me feel intellectually inept, particularly when those moments involve dogs.  Which is why I was delighted to experience two different instances over the last two days in which I literally got to do those moments over again.

This past Sunday morning I enjoyed a rather euphoric run, due mostly to the incredible weather and the fact that I started my day with a forget-the-dogs-I’m-going-running-by-myself attitude. Just a few minutes into the run, I saw someone heading my way with a couple of dogs.  To be exact, two off leash dogs trotting along 15-20 feet in front of their owner.  As I got closer, I could see that the girl was young–maybe early 20s–and the two dogs were relaxed, happy, well cared for and clearly staying close to, but not next to, their mom.  I could also see that one of them wasn’t even wearing a collar, and the owner didn’t even have leashes with her.  True to form, as soon as I got within 10 feet of one of the dogs, she hollered out that all-time fav, sing-song off leash phrase:  ‘They’re friendly!”  Yep, now I’m irritated.

As she finished saying it, I sincerely smiled, said good morning, and replied, “I’m sure they are.  I have four dogs of my own–but I keep them on leash.”  By the time I was done saying it, we had already passed each other and I wasn’t about to stop running, particularly because I was already out of breath and assumed that unsolicited dog advice is even less palatable from a sweaty, red-faced person gasping for air. 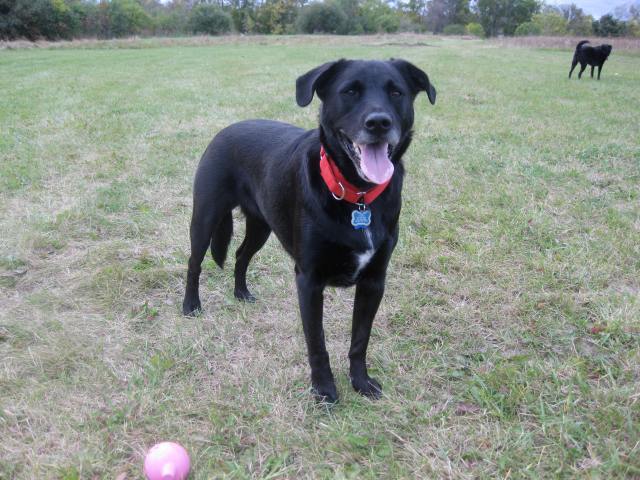 But that didn’t stop me from replaying that brief moment over and over in my head for the next 25 minutes.  What if I wasn’t involved in animal welfare, never thought about dog advocacy or dogs and public safety issues, and had just been running by her as a fellow dog owner blissfully unaware of the myriad problems with off leash dogs?  In other words, what if I had been myself five or six years ago?  What if I had been me, at her age?  How would I have responded?  I likely would have been genuinely happy to run into the dogs, may have even stopped to pet them, and would have definitely told the owner how beautiful they were and to have a great day and enjoy her walk.

The more I thought about it, the more I realized what a perfect opportunity that was to stop and chat it up with a nice person in a low-stakes, stress-free context and maybe share some helpful tips that might lead her to make better decisions for her and her dogs in the future.  And then of course I got irritated again, thinking about why my much-needed moment of personal time and exercise had to be interrupted by dog stuff.  Even when  I try to get away from it, I can’t get away from it.  And the psychological warfare continues. 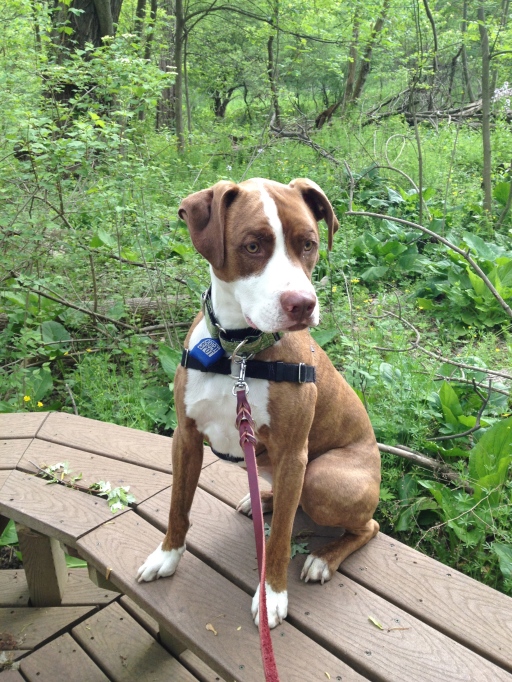 “Mom, this leash is seriously the only reason I’m not ditching your ass right now to go chase that squirrel.”

Well wouldn’t ya know it, during my cool down walk 40 minutes later, I ran into the same girl again.  Or should I say, I ran into her dogs, with her about 30 paces behind them.  Given the specific spot where I ran into them, it was obvious that she had covered nearly a mile on a public walking path with two off leash dogs, one of whom had no collar or ID, and no leashes in her hand.  In fact, other than her coffee, clothing, and slippers, she had nothing on her at all.  I crouched down to say hello to one of the dogs and then walked up to her smiling, with every ounce of positivity oozing out of my pores . . . along with a lot of perspiration.

She had a sheepish, guilt-ridden look on her otherwise very friendly face that said, “Oh god, this woman again, I’m in for it now.”  I held out my hand, introduced myself and said, “Those are some really beautiful dogs.”  We chatted for a few minutes.  And I managed to work in something along the lines of the following:

Look, I’m sure you’ve gotten crap from other people before, and I seriously don’t want to rain on your peaceful Sunday morning walk with your dogs, if I haven’t already.  I totally get it, you’re just out trying to enjoy yourself and let your dogs have some fun.  They’re clearly well-behaved, friendly and not causing any problems.  I’ve got dogs too.  And I used to walk them off leash too.  But I finally learned the hard way that it’s  not fair to other people around me who either aren’t comfortable with dogs or who have on-leash dogs who need space and don’t want to constantly worry about being approached by off-leash ones.  And I realized that risking one of my own dogs being lost or hurt wasn’t worth it.  One of your guys doesn’t even have a collar or ID.  If someone finds him, they’re either going to take him to the shelter or maybe even keep him, whereas they could’ve just brought him back home if he’d had the ID collar on him.

To which she genuinely replied, “Yeah, I know.  I’m being a real shit this morning, aren’t I?”  We laughed, said our goodbyes and went our separate ways.  I’d like to think that she actually took what I had to say to heart.  But I’m also willing to accept the fact that maybe she just found me annoying and will keep doing the off leash thing for a while, or forever.  Maybe at the very least, she’ll put an ID tag on that dog.  But I walked away happy with the serendipitous second chance, and with the fact that I tried.

Deja Vu No. 2 occurred yesterday evening when I ran past a woman with two dogs who I’d seen the previous week.  The Friday before I had been out walking Peaches, who enjoys lingering at the same pee-stained rock or patch of grass for minutes on end, when I saw two large on-leash dogs approaching with an apprehensive couple who looked like they really wanted to pass us with minimal contact or interference.  I waved and hollered out, “If you guys are heading this way, I can just move to the side over here.  She tends to drag her feet in the morning.”  To which they seemed appreciative and relieved.  Definitely DINOS people.

As they headed down the path past us, they complimented Peaches’ appearance, and I commented on how handsome their dogs were too.  They then replied in a somewhat routine but exasperated tone, “Yeah, they’re a real handful,” before they disappeared around some trees.  So when I ran into just the woman walking those same two dogs on my run last night, I pulled my headphones off, said a quick hello and mentioned I remembered seeing her a few days ago and told her how cute the dogs were.  They were that big block-headed, smiley kind of cute, but I never stopped to say a closer hello because she made a point of always leaving a reasonable distance between their space and mine.  Again, she replied with what must be her go-to dog phrase:  “Yeah, they’re also a real handful.”

To which I replied, “The best dogs usually are!” before popping my ear buds back in and heading on my way. 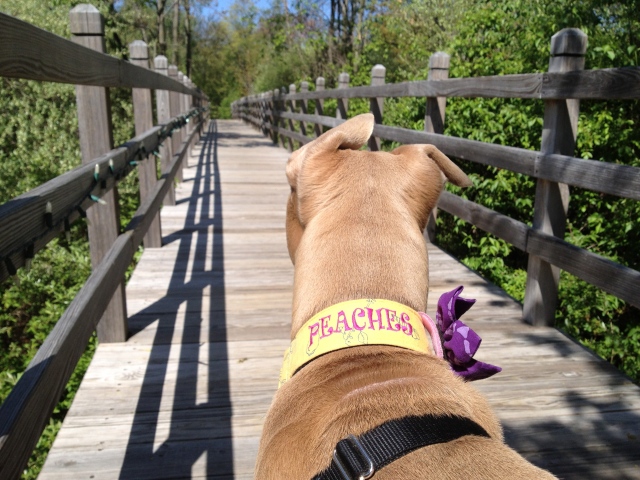 “I wonder what’s on the other side of this bridge? Maybe it’s a couple of off-leash dogs who will get up in my face when I don’t want them to.”

I wonder if the girl with the off-leash dogs and the woman with the on-leash ones have ever run into one another?  Because those two separate encounters both happened on the same walking path within the same 100 yard stretch.  Maybe I should start wearing a DINOS t-shirt when I run so that the three of us can have a special educational moment together should our three paths ever intersect simultaneously, after which we’ll all go buy some leashes and harnesses and enjoy a cold beer together?

In terms of management tools, these two owners were definitely at opposite ends of the spectrum: our off-leash gal wasn’t even carrying a leash, and our responsible on-leash owner had prong collars on both her dogs.  Also a pleasant reminder that it is possible to maintain and write about your opinions on certain approaches to training and dog management, without having them bleed into your daily interactions with fellow dog owners.  And in both these cases, I was pretty grateful to have run into friendly, courteous owners who were both easy to talk to.  Especially when the alternative could have been something akin to Nicole Wilde’s recent off-leash experience.

Maybe tomorrow I’ll get a chance to drive by that same owner who seemed surprised the other day when, after tethering his dog and leaving him unsupervised in the front yard, he found him running loose down the street with 20 feet of rope tie trailing behind him.  What do I hope to say then?