I frequently talk and write about the pervasiveness of dogs in our world.  Dogs as secondary subjects intrigue me.  Whether it’s a dog painted into the corner of a masterpiece by Rembrandt or a cleverly crafted marketing gimmick utilizing our relationship with Fido, I love finding dogs so entrenched in our culture, even when I’m not actively looking for them.

Here are a few noteworthy places I found dogs today, some more prominent than others.  Perhaps the most interesting thing about each of these pieces is the stunning juxtaposition of the ugly and the beautiful when it comes to human nature.

Photographer Tatjana Plitt took some beautiful portraits of United States military families  highlighted in relation to the legacy of “Don’t Ask Don’t Tell” that were featured on Advocate.com back in December and recently reposted on Upworthy.  Naturally, every American family enjoys being photographed with their beloved pets, which can be found in nearly every one of the photographs.  The one above though is my favorite. (The ugly: “Dont’ Ask, Don’t Tell”; The beautiful: A celebration of real families.) 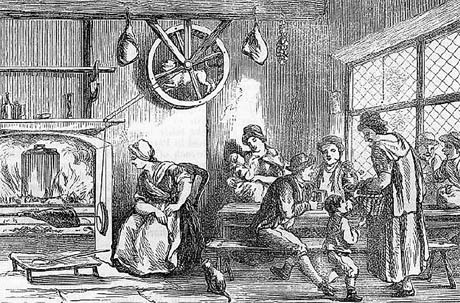 Andrew Sullivan reposted historical commentary from a couple other bloggers on the varied roles that dogs have played in human culture, specifically their ability to churn butter via old-fashioned dog treadmills.  It’s the final sentence from Nicole Twilley’s excerpt though, that really gives one pause:

Wilson reports that “dog wheels were still being used in American restaurant kitchens well into the nineteenth century,” when, in the face of early animal rights lobbying, they were often replaced with young black children.

(The ugly: 100 years ago, animal rights were often more important and successfully championed than human rights; The beautiful: Dogs have done so much for us historically–even churning butter.)

Dogs make only a brief and insignificant appearance in this video.  But their presence around landfills in impoverished countries is a familiar sight, and this piece itself is an incredible one.  Children in Paraguay playing classical music on instruments made from trash dumped where they live. (In the words of their Orchestra Director, The ugly: “The world sends us garbage.”; The beautiful: “We send back music.”)