I have never been much of  a football fan, nor have I ever really understood much about the sport.  I love athletics, sporting events, and drinking and eating too much at Superbowl parties. I have always enjoyed playing sports myself, just not football.  As an undergrad at Cal, I enjoyed going to games and cheering for our team, but even when Berkeley was actually playing well, Berkeley, as a town or college, has never really been about football.

Peaches all decked out for the big game against Michigan State

Moving to Ann Arbor for graduate school certainly made things more interesting–because the only thing that “tree town” has more of than trees is Michigan football fans.  And yet still, I’m not sure my enthusiasm was defined by much more than attending games at the Big House and enjoying the community and camaraderie that come with living in a true college football town.  And at the end of the day, I just really didn’t care that much.

For uninformed, lackluster football fans like me, individual players and people matter.  Because without  a more nuanced understanding of the game to anchor my interest, I’m inevitably going to judge the sport largely based on what I hear and see in the media and from others around me.  And unfortunately for college football and professional football, the names that stick out in my mind are the notorious ones:  Reggie Bush, Jerry Sandusky, and Michael Vick.  Whether it’s justified or not, these people, these scandals, often define the sport of football for many people.

Luckily for football, Denard Robinson appears to be doing everything he possibly can to change that.  Because Robinson is the outlier, the deviation from the norm–at least in my mind.  Refusing to succumb to stereotypes both on and off the field, Robinson is setting a new standard that’s hard to ignore.  Rushing the ball for more yards than any other QB in a season in NCAA history, all while taking occasional crap from fans and the media about not fitting into the traditional QB box, Robinson is proving that exceptional athletes and football players really can be responsible students and quality role models too.  And all this helps set him apart in the eyes of experienced football fans as well as folks like me.

And even more important is the fact that you can’t help but like the guy.  He’s always smiling, always.  Even after throwing a not-so-great pass.  And when he’s not smiling on the field, he’s usually smiling while yucking it up with fellow students at Michigan basketball games, as though his celebrity is the last thing on his mind.  And on top of the stellar attitude, he’s an exciting player to watch.  Players like Denard Robinson make football exciting for everyone, the same way that Pelé did for soccer and Muhammed Ali and De La Hoya did for boxing.  You don’t have to be a fan of the sport to be mesmerized by the contributions these athletes made.

Those of us who work in animal welfare, and specifically who advocate for pit bull type dogs love to complain about and be outraged by less informed people judging dogs and pit bulls based on what they hear and see in the media.  And yet, that’s pretty much exactly what I’ve done with football my whole life.  That was the storyline I was fed and it wasn’t really worth my time to go out of my way to look for a better one.  And more importantly, nobody who did care about football seemed to think it was worth their time to show me anything else.

In order to solve the profound and undeserved publicity problem that pit bull type dogs now have–thanks largely to biased, reckless, and unsubstantiated media reporting–we need to care about giving people outside of our dog-loving community positive stories to replace the negative ones.  When I think about the sport of football now, I think about Denard Robinson, not Jerry Sandusky, or even Michael Vick–and that’s saying A LOT for an animal welfare advocate and pit bull owner.

Because the positive narrative provided by Robinson has overwhelmed and replaced the negative one that I previously believed.  Do I still think that the NFL is a fairly corrupt organization, and that many of the players in the league are sub-par human beings? Sure.  Do I still think that a lot of college football players and fans fail to understand the importance of the phrase “character counts”?  Absolutely.  But I also understand that those beliefs are born more of rumor and isolated incidents, than of my own personal experience, or actual evidence and statistics.  In other words, thanks to Denard, I’m coming around.  Now, I actually care about learning a little more about the sport.  I care about reading more, watching more, looking for other examples of players that exemplify the same outstanding character and talent demonstrated by Denard Robinson.

Kim was one of Peaches’ original “fans.” And every time they see each other, Peaches smiles.

If you are someone who cares about changing public perception of pit bulls, then you need to stop spending so much time crying foul every time someone says something stupid about pit bull type dogs, and instead focus more on finding and championing the Denard Robinsons of our community.  Stop reacting to the negative storyline. Instead, focus on replacing it with a new, positive, and accurate narrative that appropriately shows pit bulls for what they are and what they can be: Individual dogs, all equally equipped to live successfully and lovingly with people, given the appropriate support and environment.

This is why I spend very little of my time getting overly worked up about pit bull related soundbites like Kelly Ripa’s recent gaffe or the Twittersphere lighting up over a box of Milk Bones on Michael Vick’s kitchen table.  I can’t change those things, and more importantly, no amount of shouting I do about them will change anybody else’s mind either.  Here’s what I do have control over:  My work with my therapy dog, Peaches. 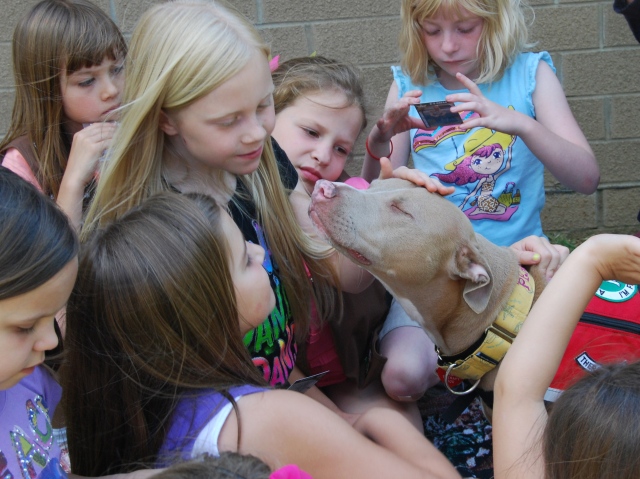 Like Mr. Denard Robinson and his role as Michigan quarterback, Peaches doesn’t fit in the stereotypical “pit bull” box.  She defies and transcends it.  Not only does she not match the uninformed negative associations with pit bulls that have been spoon fed to the masses over the last few decades, but she doesn’t exactly fit the traditional “pit bull” role cherished by some of the real die hard breed fanatics either.  Peaches is unique, and an individual, like all dogs are, regardless of breed.

And every time I head out with her to volunteer at the hospital or read with kids at school, my goal is not to walk up to everyone I meet and say, “Haha!  Look how wrong you were about pit bulls.  Next time try learning a little bit more about them before forming such ignorant opinions, buddy.”  Because calling someone out and making them feel like an idiot isn’t how you change someone’s mind.

Unlike the stereotypes about most pit bull type dogs not getting along with other animals, Peaches happily shares her home with three other rescued dogs and an adopted cat, who happens to be the love of her life. This is the case with every dog of any breed given responsible care, socialization and training.

I focus instead on facilitating people’s learning and re-framing their world view.  I focus on making their experience with and their exposure to Peaches so positive, so noteworthy that it simply overwhelms the other stories competing for their attention.  My goal with Peaches is to replace the current narrative.  And the only way to do that is to have a story worthy enough to facilitate that replacement.

Changing people’s minds about “pit bulls” and other commonly discriminated against types of dogs requires stories and characters that are larger than life–that blow the media hype and unfounded stereotypes out of the water.  Ones that are so sticky, so profoundly influential and real, that even the most uninformed among us just can’t shake them.

For me and my family and friends here in Southeast Michigan, Peaches is our Denard.  But the reality is that she is one of many.  Whether you’re entranced by Jim Gorant’s accounts of Wallace the legendary disc dog and the rescued Vicktory Dogs, or the mesmerizing presence of Stevie the Wonder Dog, we are surrounded by stories of all kinds that remind us all of the dangers of stereotyping and forming opinions based on sensational news and headlines.  And the best thing that advocates for any cause can possibly do is be proactive, not reactive.  Focus on the positive, not the negative, and ultimately realize that nobody is obligated to go out of their way to change other people’s minds.  But you also can’t complain about what and how other people think if you’re not willing to try.

Ultimately, as advocates, we want the media writing powerful stories about our champions like this one that John U. Bacon recently wrote about Denard Robinson:

But all these points obscure a far bigger one: How lucky Michigan fans, students and alumni are to count Denard Robinson as one of their own.

Denard grew up in Deerfield, Florida, the son of good parents, but he lost a brother when he was just ten, and then a talented cousin went to prison for armed robbery.  Denard realized he had to make better decisions – and he has. . . .

It’s not just what Denard does, but how he does it, that makes him so special – something he demonstrated on the second play of his college career, when he dropped the snap, then started running the wrong way.  When he stopped and looked up, he saw a rush of defenders coming right after him, in a bad humor.  And then, just as suddenly, Denard seemed to remember he was the fastest man on the field.

What happened next was something Michigan fans should long remember.  From a dead start, Robinson simply took off, flying past would-be tacklers like they were treading water and he was driving a jet ski.  Touchdown – the first of 39 rushing, so far, and 85 total.

Robinson probably wouldn’t have gotten into Michigan without football, but he’s made the most of it.  He goes to class, every day.  He studies every night.  He prefers bowling to beer drinking.  He often quotes his parents: “Denard, they can take football away from you, but they can’t take your education!”  He will graduate on time – and he has been unfailingly kind to every single person he has encountered during his time in Ann Arbor.  You will simply not find a finer young man.

Of the hundreds and thousands of pit bull ambassadors–ranging from disc dogs to therapy dogs to your typical family dogs– all over the world, here is a small but noteworthy sampling of what I like to think of as “Denard Dogs”:

For additional resources and an in-depth look at how media, myth, and politics have shaped public perception of canine aggression and pit bull type dogs, visit the National Canine Research Council’s Resources Page.